With our trip to India being squeezed into the children’s half term holiday, we had to be selective about what we would be able to fit in. However we could hardly come and not visit perhaps the most famous monument in India, the Taj Mahal.

So with the help of a local friend we arranged for a driver to pick us up and to drive us down to Agra for an overnight stay. We had heard the best time to see the world wonder was at the early sunrise light, so we thought an overnight stay would give us the best options. On the 3 hour journey we gradually left the polluted haze of Delhi behind us and arrived to a sunny afternoon in Agra.

As we were only staying one night we checked into the luxurious 5 star Trident Agra. I must admit arriving and being welcomed into their cool marble lobby by smiling faces and a refreshing warm ginger drink was just lovely! The office manager introduced himself and took us on a tour of the lush hotel grounds, letting us know that anything we needed he would be more than happy to help with. After the crazy fast paced, high alert feeling of being in Delhi it felt so nice to hand over our bags, relax and let the kind staff look after us

Our room was lovely, small with the four of us in together but tastefully designed in modern fabrics, and it was so nice to wash away the dust of Delhi in their powerful shower with their cypress and lavender shower gel….I think I could have stayed in there forever!

We decided to spend the rest of the day enjoying this moment of calm, one thing we have learnt from travelling with children is we need to balance out the incredible sightseeing with some downtime. So a bit of fun splashing in the large hotel pool followed by some delicious food that they recognised in the hotel restaurant ( a pepperoni pizza and chips!) was just what the the girls needed!

In the evening the hotel put on a traditional puppet show with some exquisite handmade Indian puppets, of course Den had to play the part of the King so was turbaned up for his role, which the girls thought was hilarious! Molly and I had some pretty henna designs painted onto our hands by a smiling lady in a beautiful crimson sari, a potter showed people how they traditionally made clay cups on the stone potters wheel and an heavily moustached astrologer spoke about the night sky! A magical evening!

The following morning we set the alarm early, we were going to do it! Sunrise at the Taj! On the way the sun was already starting to peek through and the streets were quiet, well by Indian standards anyway! We parked up and began what can only be described as running the gauntlet on the entrance to the Complex!

The strong sewage smell and the immediate barrage of sellers wanting us to pay for a tour, a book, some postcards, a marble elephant, a chessboard, a trip on a tired looking horse drawn carriage, a snow globe of the taj, a fridge magnet…a bottle of water! It was so intense! Once we had made it through the barrier and began the walk up to the ticket booth we were feeling quite relieved and actually pretty chuffed at it not being that busy! Hmm we should have realised something wasn’t quite right this was the main attraction after all, where was everyone?…well it turns out they had shut the monument for a couple of hours while a presidential visit took place!!! Bummer!

So after a moment to reevaluate our options we decided to rerun the gauntlet, return to the hotel to have some breakfast and try again in a couple of hours.

As it turned out this was a good decision we indulged in a huge buffet breakfast, I think Daisy was impressed by the breakfast doughnut selection, and after a couple of cups of coffee we prepared to try again. This time we were heads down and speedy through the smelly entrance and wonderfully the sun had cleared the early morning mist! We bought our tickets and filed into queues of foreigner male and foreigner female for security checks….and finally we were in!

Now it’s difficult to describe but as you walk along the pathways and through the archways towards the monument you can only see a white lighted area where the great building should be. Then as you begin to exit the closest gateway suddenly as if by some sort of clever magic trick she appears before your very eyes framed in the archway! What a sight! So serene and majestic, and from the many gasps around me at her beauty it’s easy to see why its quite rightly been given the acknowledgment of being a wonder of our world.

Now even at 9:30am and only having been open for a short while, the cypress tree lined pathways following along the fountain pools were beginning to get busy, so we made our way along to get close to the great building.

Constructed in 1630 using pure white marble and inlaid with delicate patterns and carvings, the Taj Mahal was constructed by the Mughal emperor Shah Johan as a mausoleum for his beloved wife Mumtaz Mahal, who had sadly died in childbirth. Built to show his great love it took 22 years and over 20,000 workers to complete. It is absolutely stunning and despite the amount of visitors so very peaceful.

So after a little time spent enjoying the views from every angle and trying our best to capture it’s beauty on our cameras we returned to our car and set off to another of Agra’s big attractions the Agra fort.

Now this place would quite happily sit in any lord of the rings movies! A huge brick fortress with imposing thick wooden gateways house courtyard after courtyard of mini palaces built with large palm fringed gardens and multiple red and marble archways. Large balconies stretch around the outside walls with far reaching views overlooking the bustling city below. The monkeys ran along the walls looking menacing and far below we could see the people washing in the river water with the Taj Mahal standing proudly downstream.

The girls loved it here, there were so many hidden passageways and stairways to run up and down, leading to different dusty courtyards with decoratively carved stone windows to peek through! I think we could have spent all day exploring but due to travelling back to Delhi we had to hit the road.

Agra well you’re a bit of a mixed bag really, streets that are crammed full of dusty dirty madness! Every building seems to be under construction or disrepair, and the smells are pretty pungent!, but what jewels the monuments are! Well worth the visit! 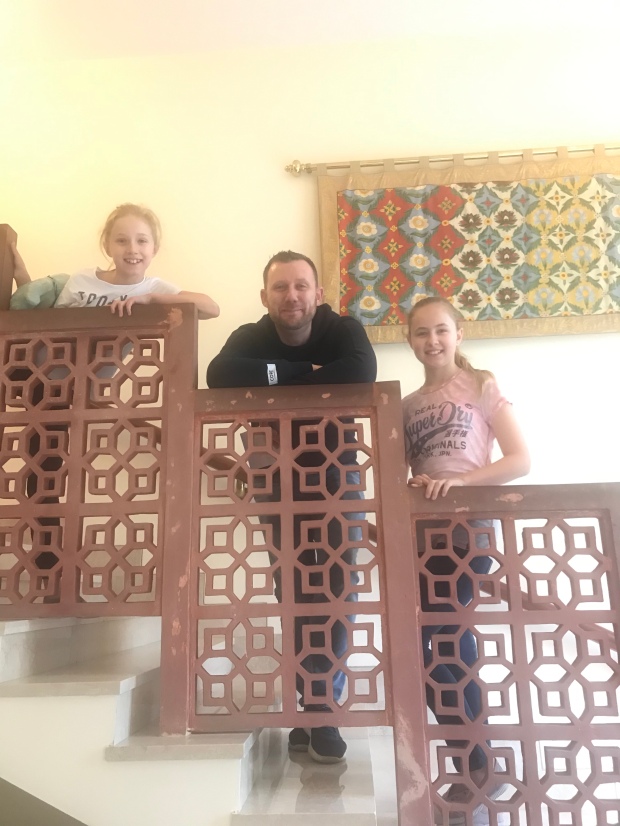 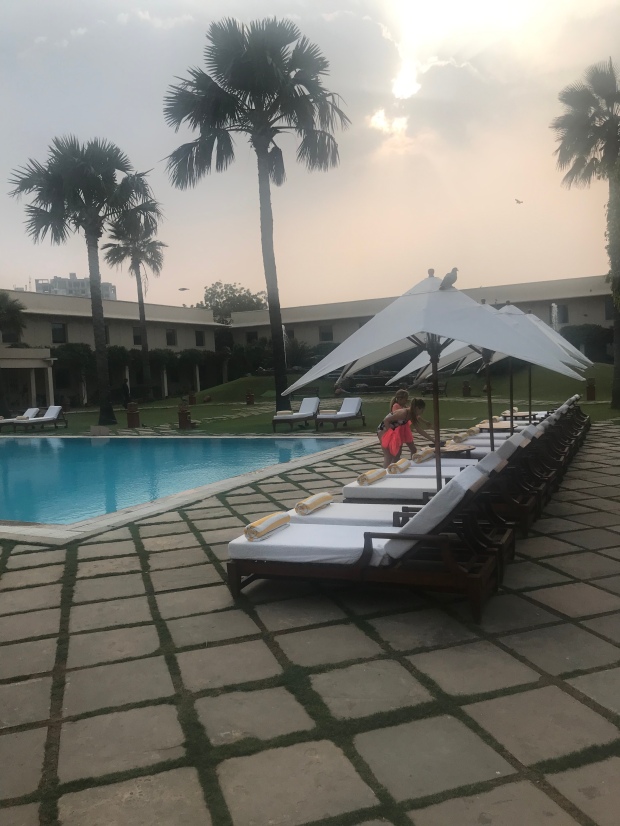 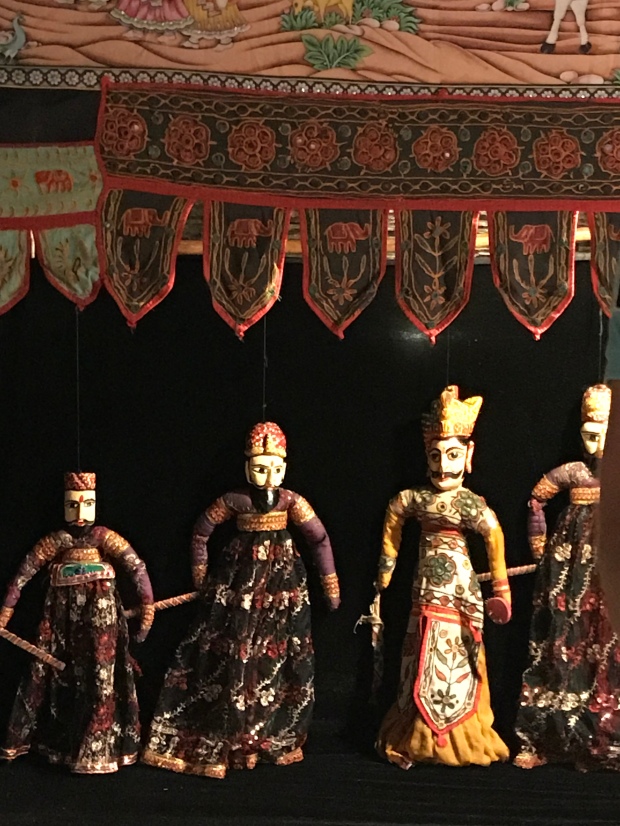 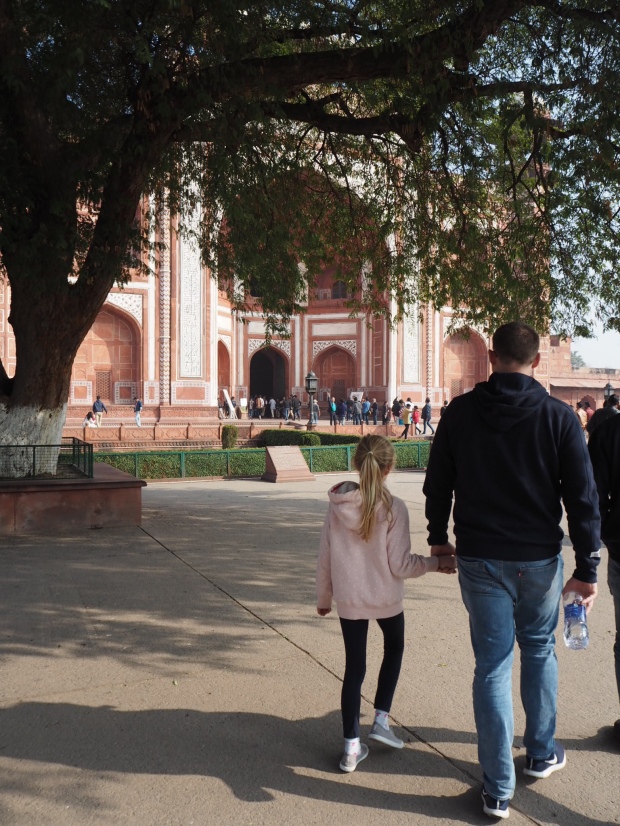 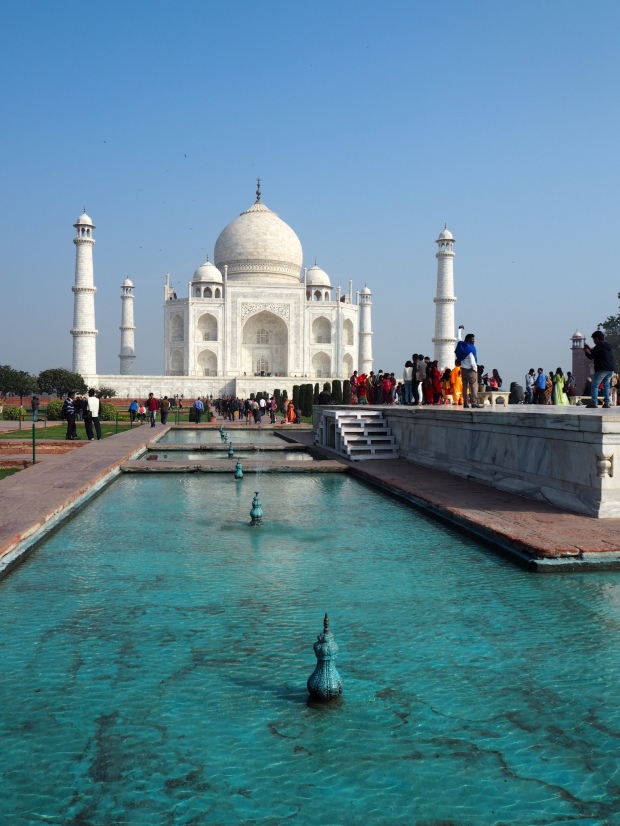 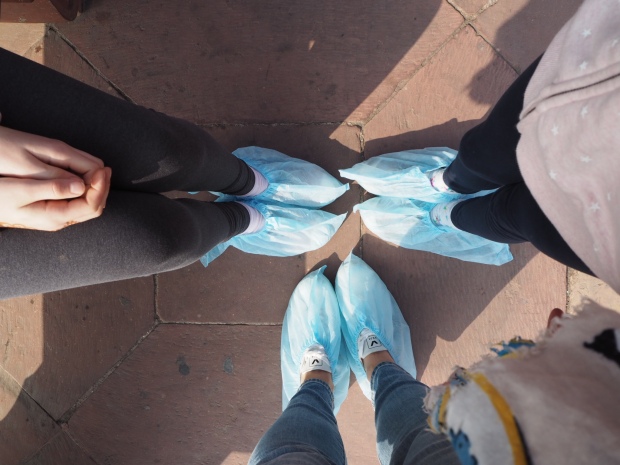 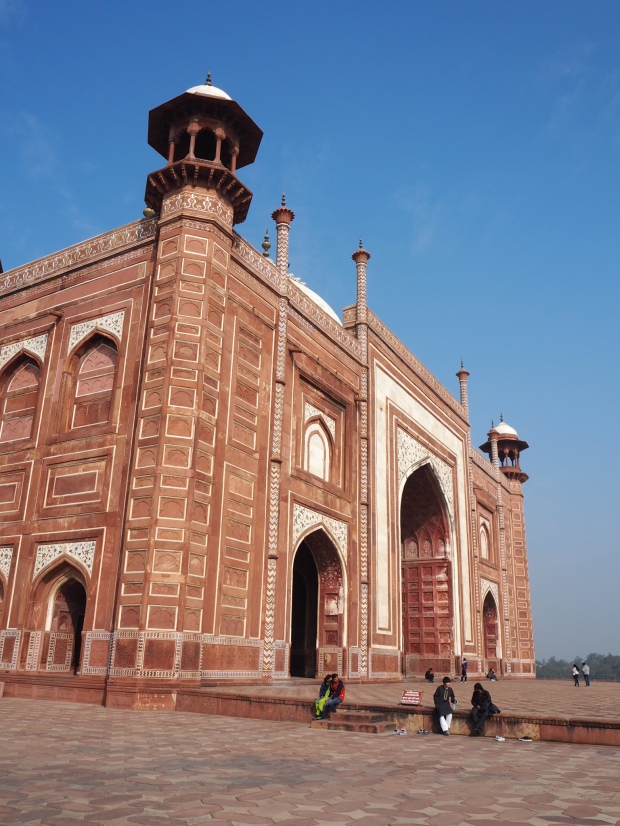 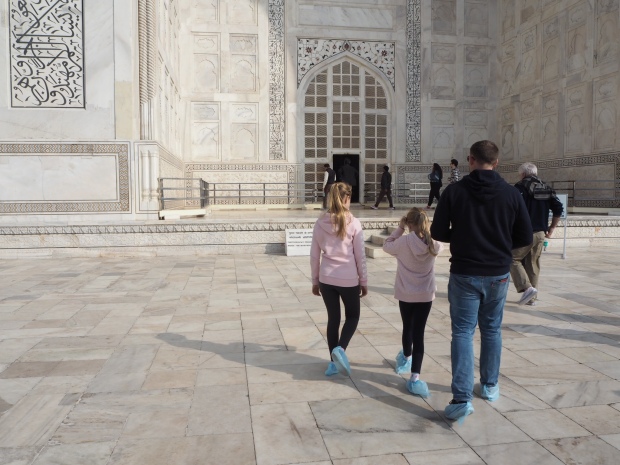 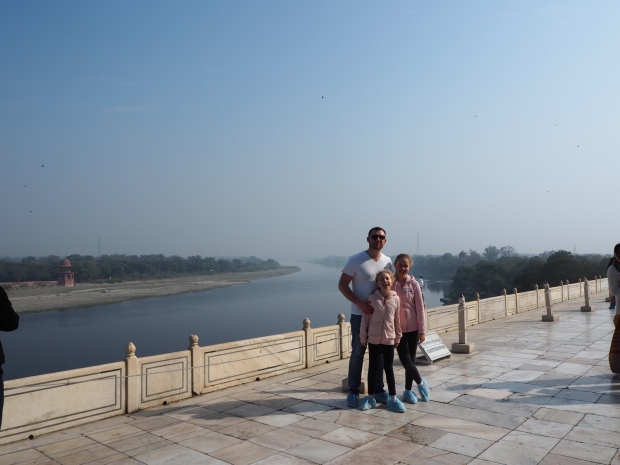 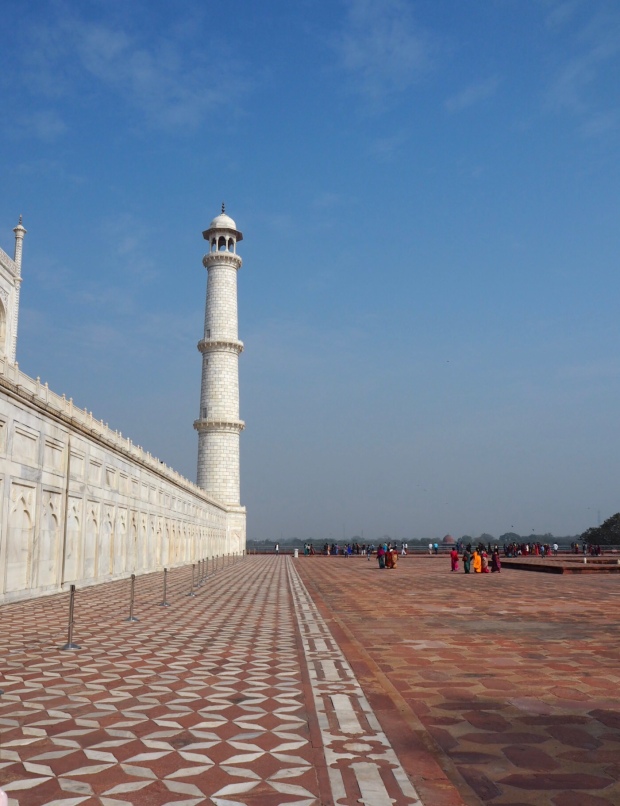 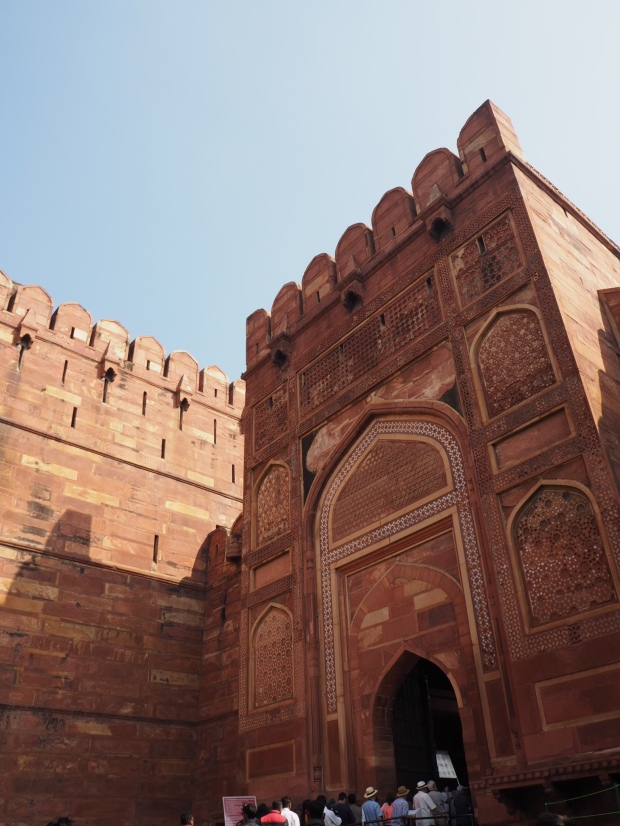 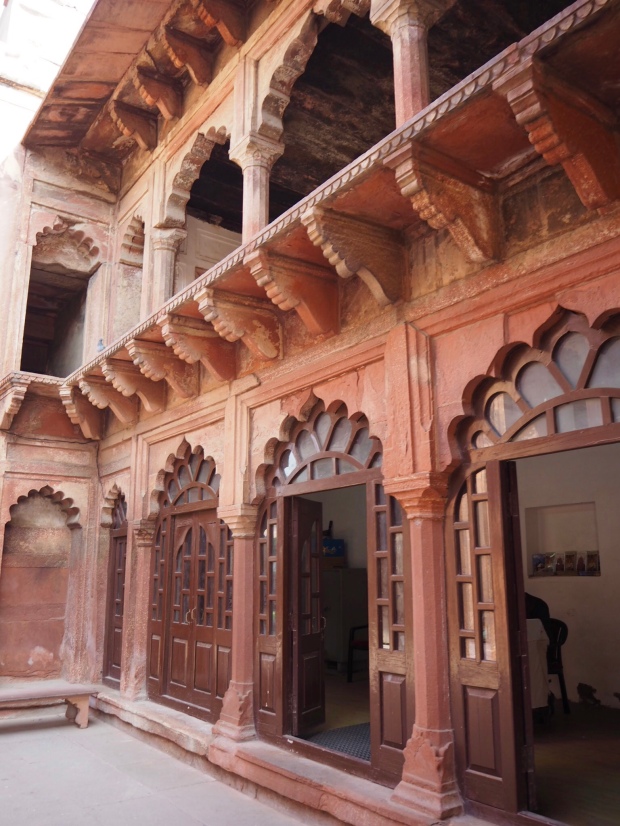 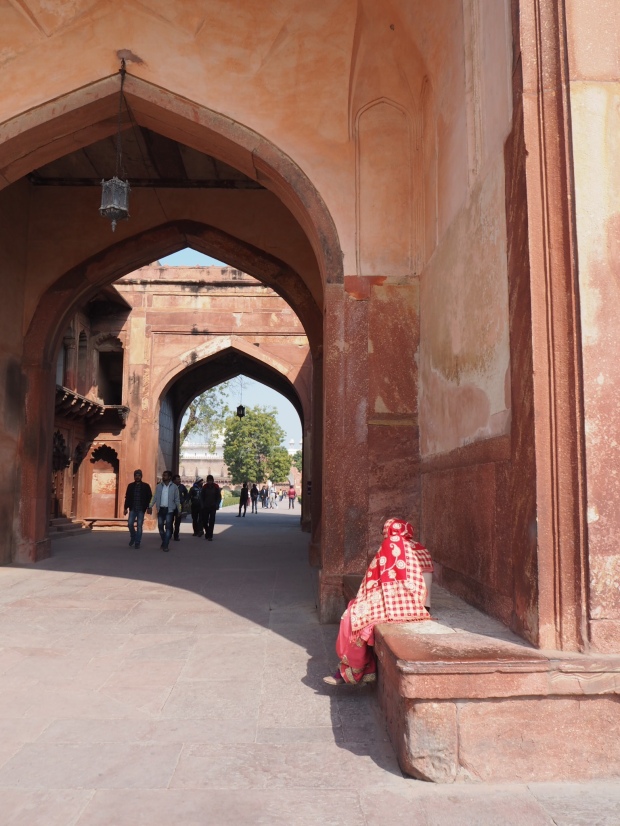 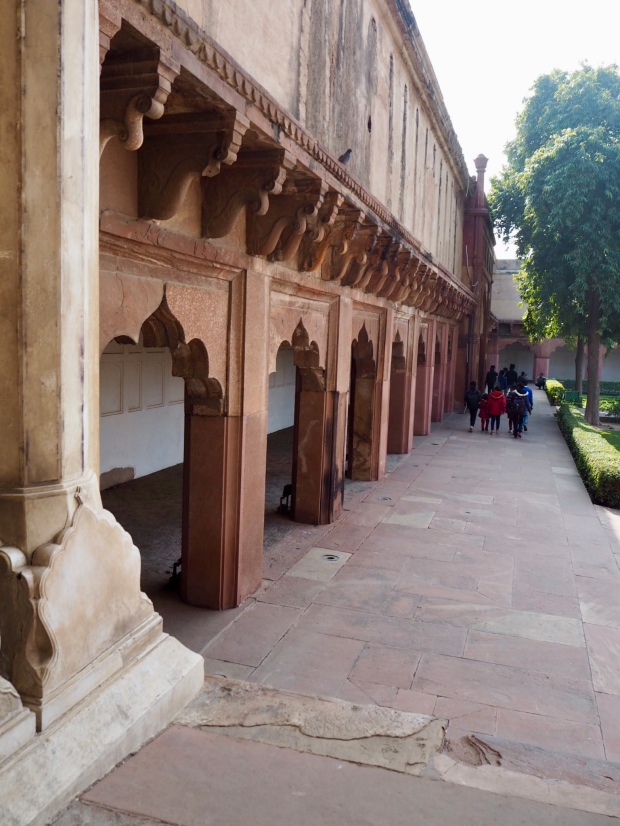 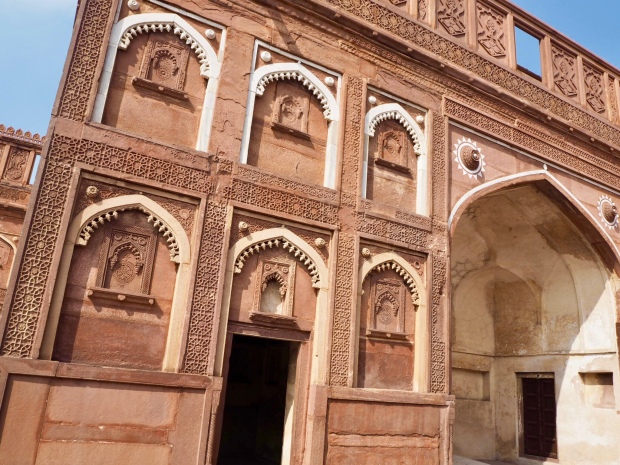 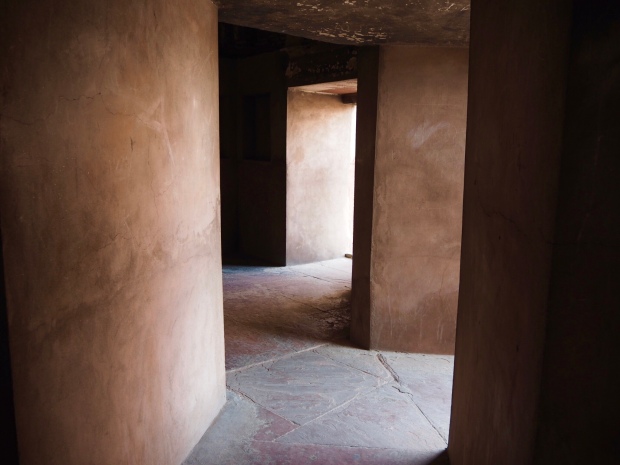 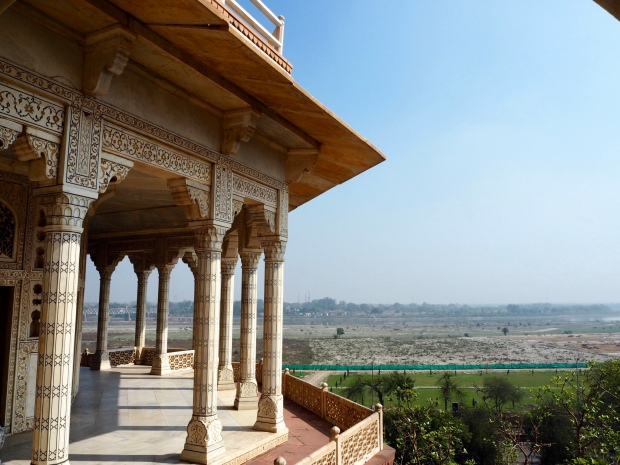 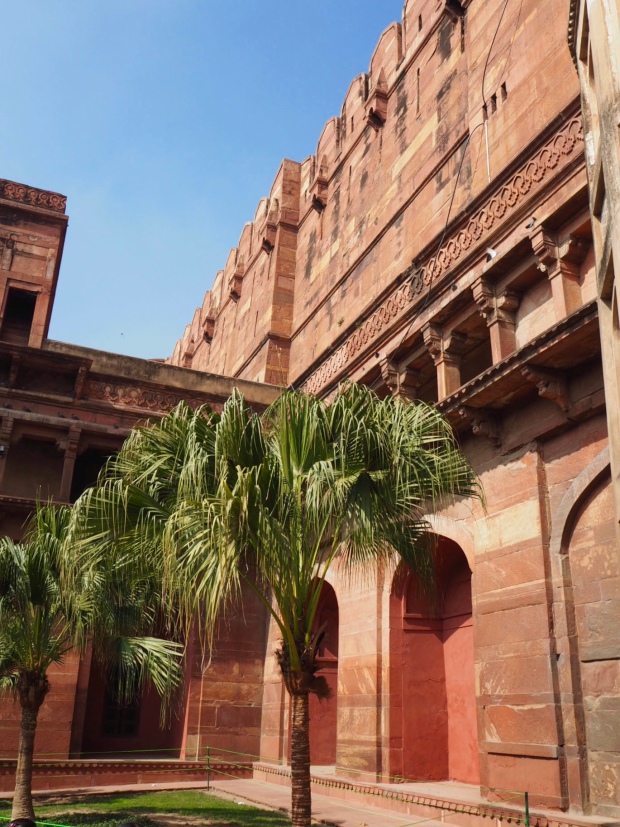 2 thoughts on “An overnight stay in Agra”